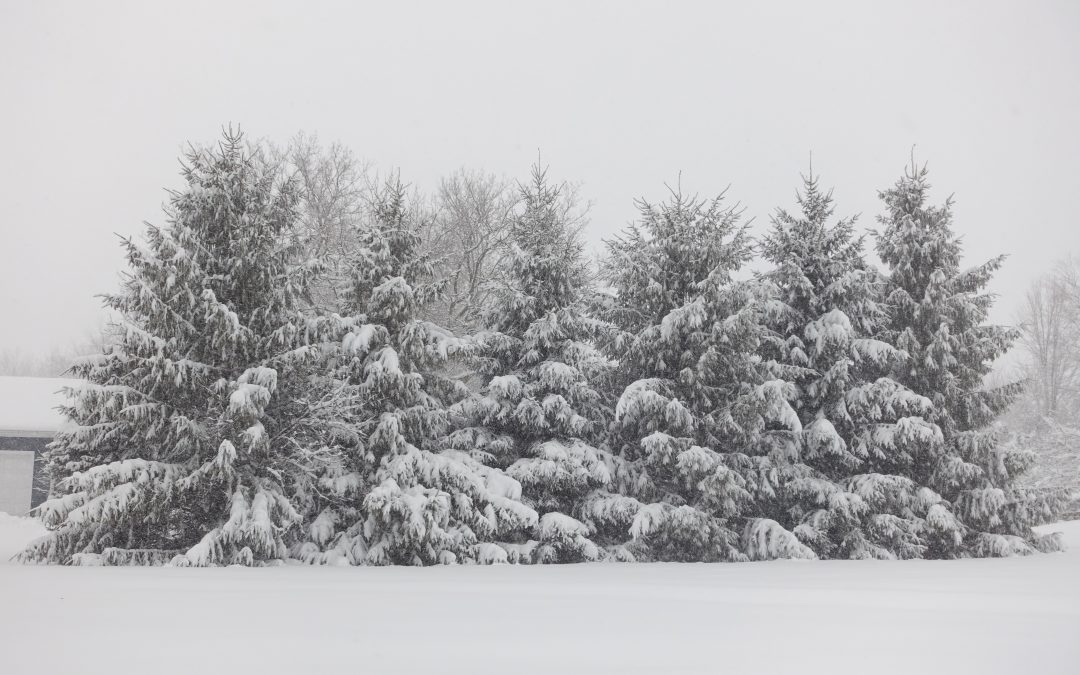 The Windy City has two baseball teams, an ice hockey team, two basketball teams, a football team, and two soccer teams, two zoos, an aquarium, many museums and cultural institutions, a lakefront, and about a kajillion things to do.  It’s the perfect place to visit in summer.

So, naturally, I am visiting in winter.  During a blizzard.  Yup.  🙄 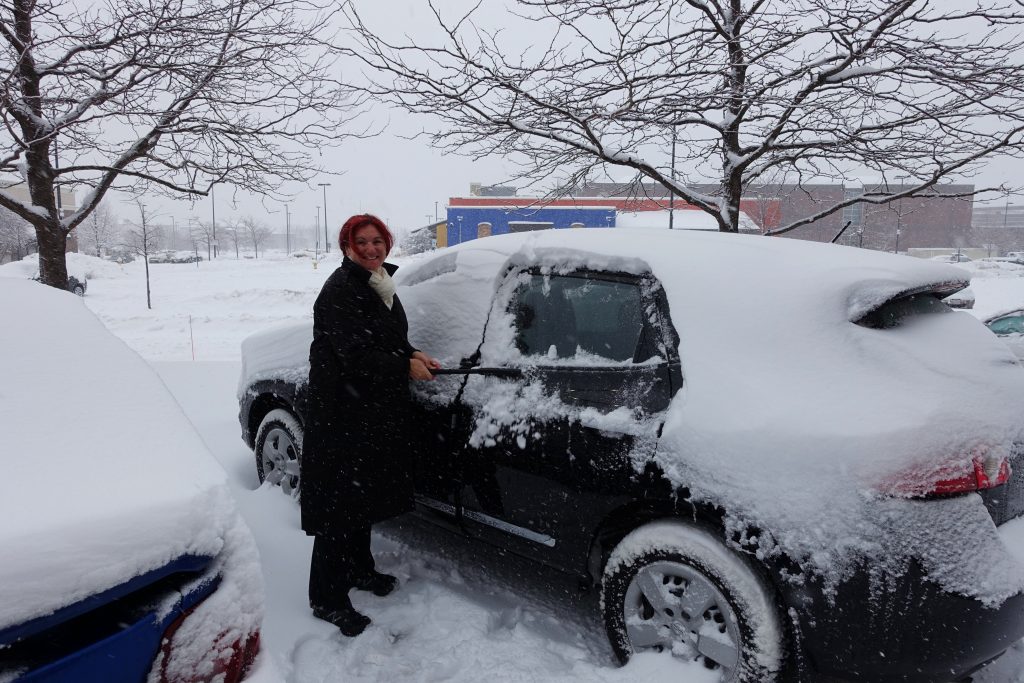 So that’s why the car had a grill scraper!

When I rented the car, I asked my husband why the car had a grill scraper.  He explained that it was an ice scraper.  What?  We don’t have those in southern California. So I decided to use it the next morning to experience a true Chicago winter.  Spoiler alert: it’s cold. 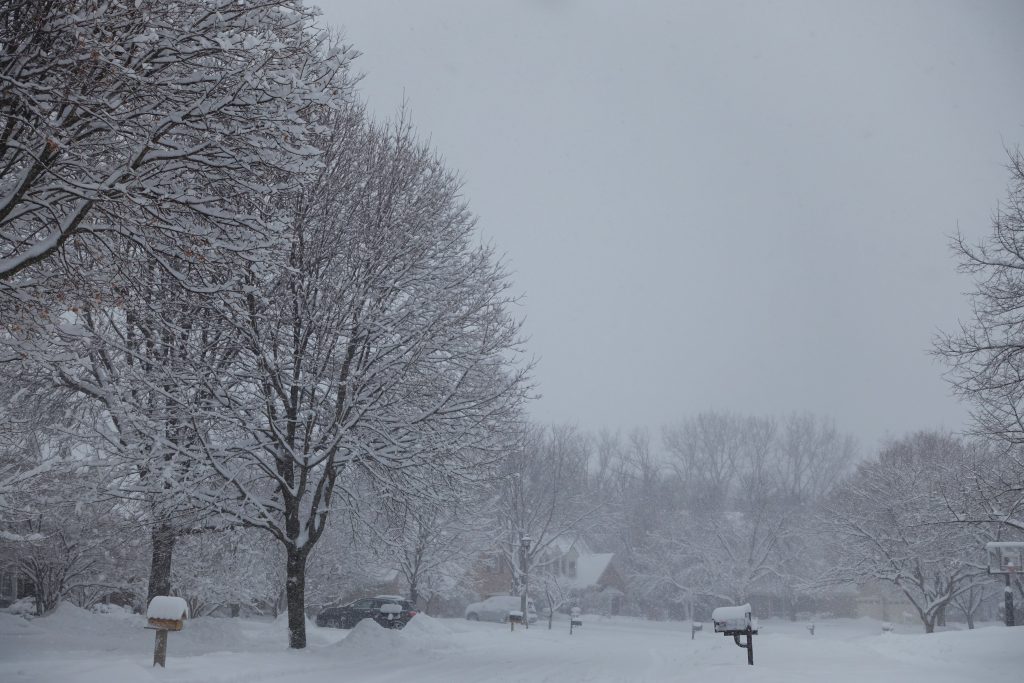 Empty roads in a winter wonderland.

And off we go!  The roads are almost empty due to the snow and to a homo-erotic event concerning acquiring territory (football) that many folks are watching.  In fact, there are places where our car is making the first tracks in the snow. 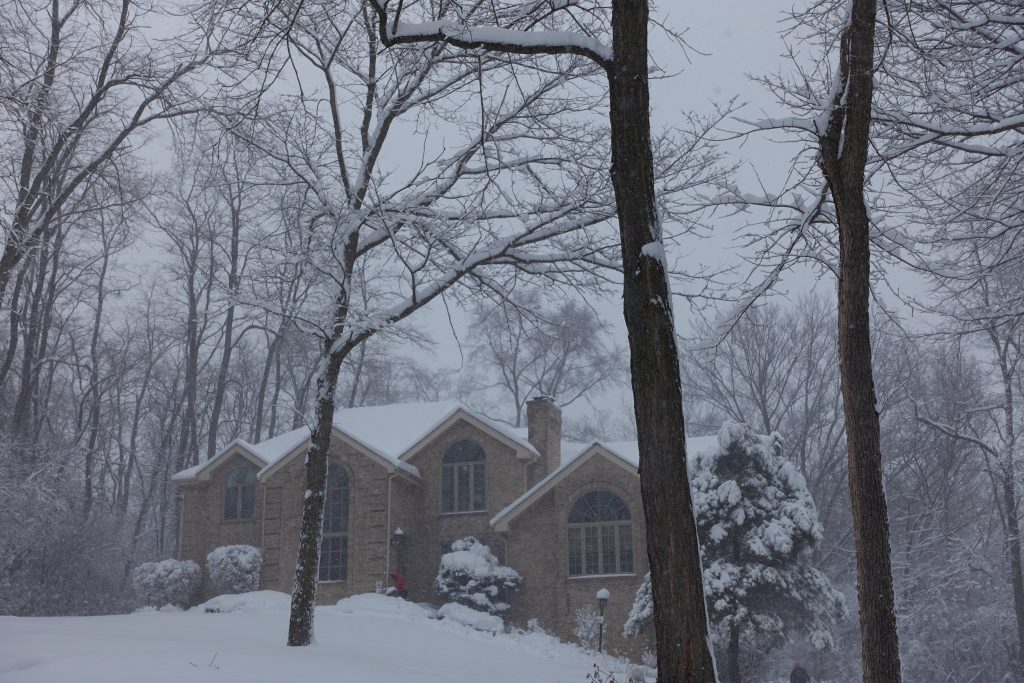 Snow is fun when you don’t have to shovel it.

I suppose this poor fellow is dressed in red so he can be easily found if the blizzard worsens. 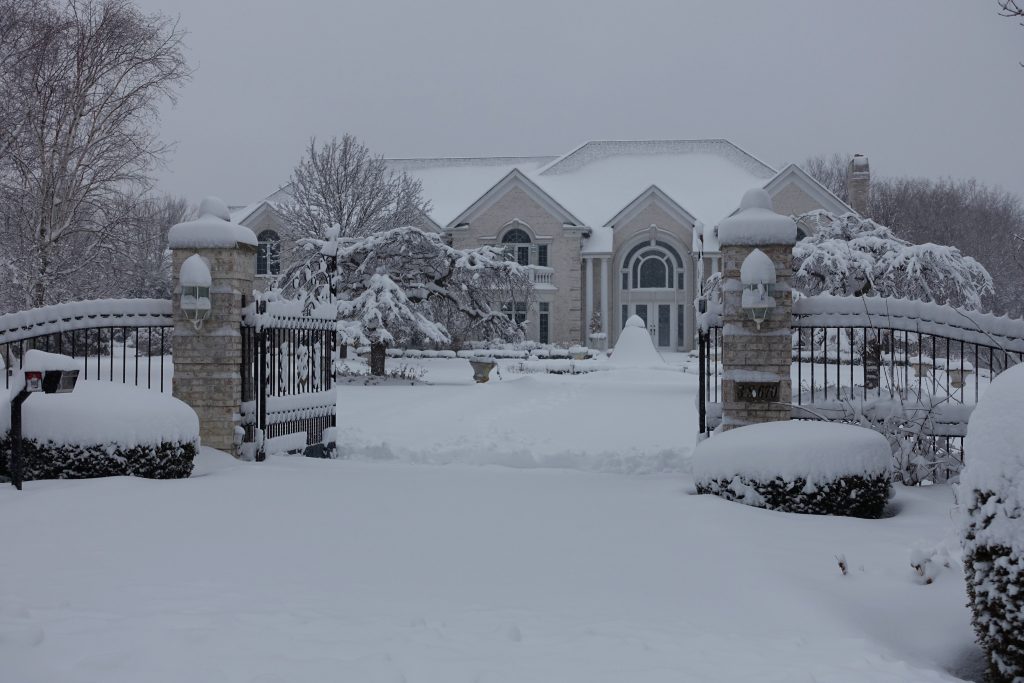 The door is open, come on in!

This gate has a remote control on the mailbox, so I suppose it’s usually closed but has to be left open so the snow won’t block it.  And what’s that triangle structure in front of the house?  And is this a McMansion?  So many unanswered questions.

There are many more houses, all covered in snow.

Enjoy our gallery of houses, each with its own beauty. 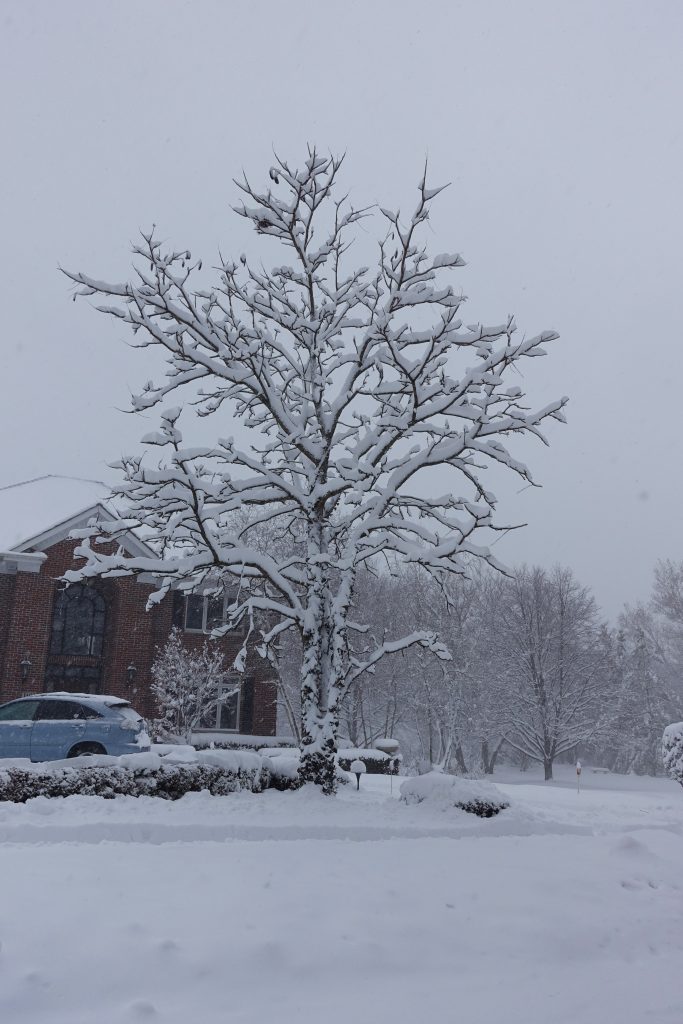 In southern California, we have few deciduous trees, and I’m amazed that something so barren can suddenly be so beautiful. 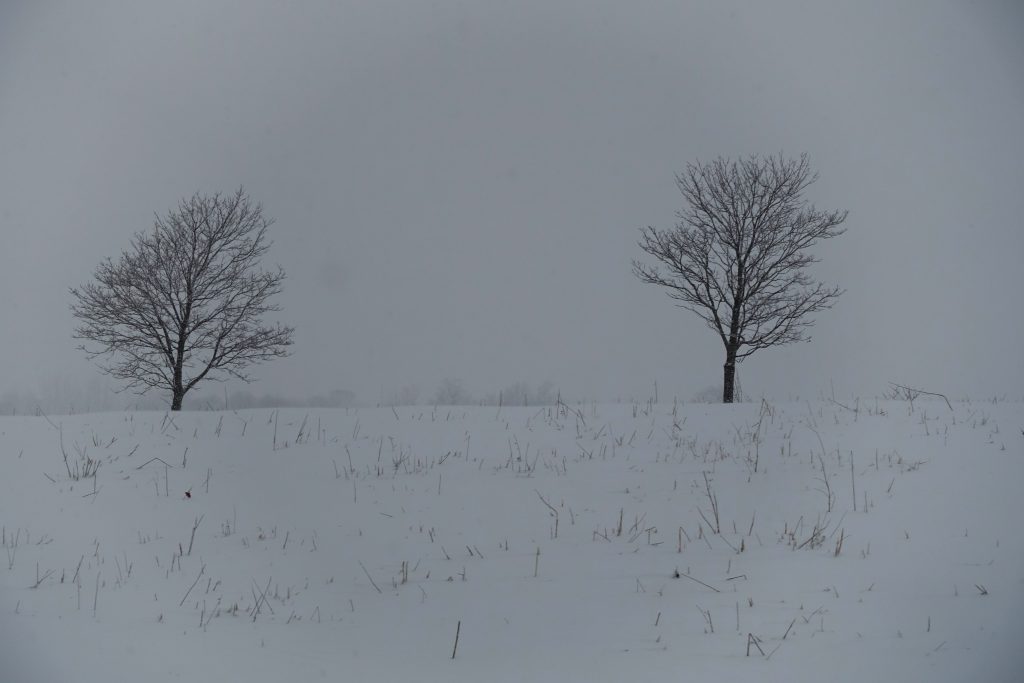 Little tree on the prairie.

In this open field, the blowing wind keeps the snow from accumulating, giving it a stark, black-and-white composure. 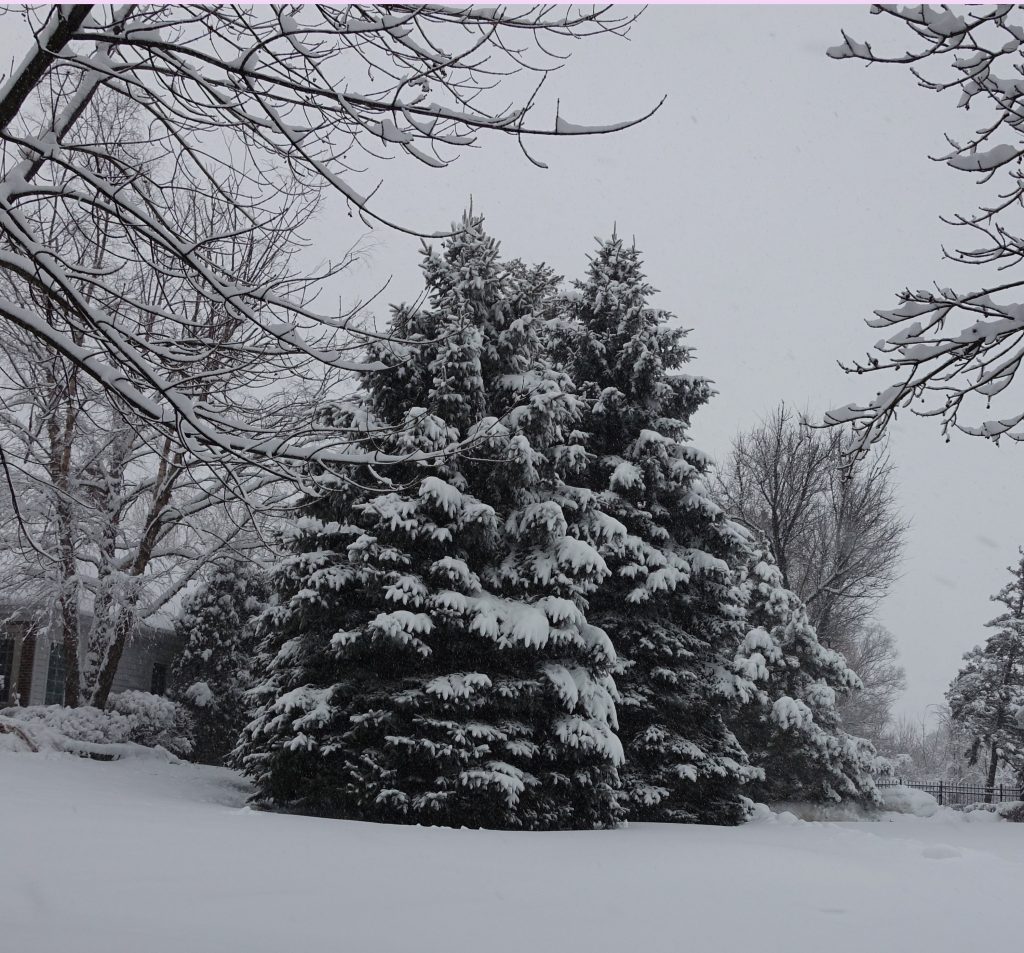 Now this is what winter is supposed to look like (to a southern California girl): Big, beautiful conifer trees covered in snow! 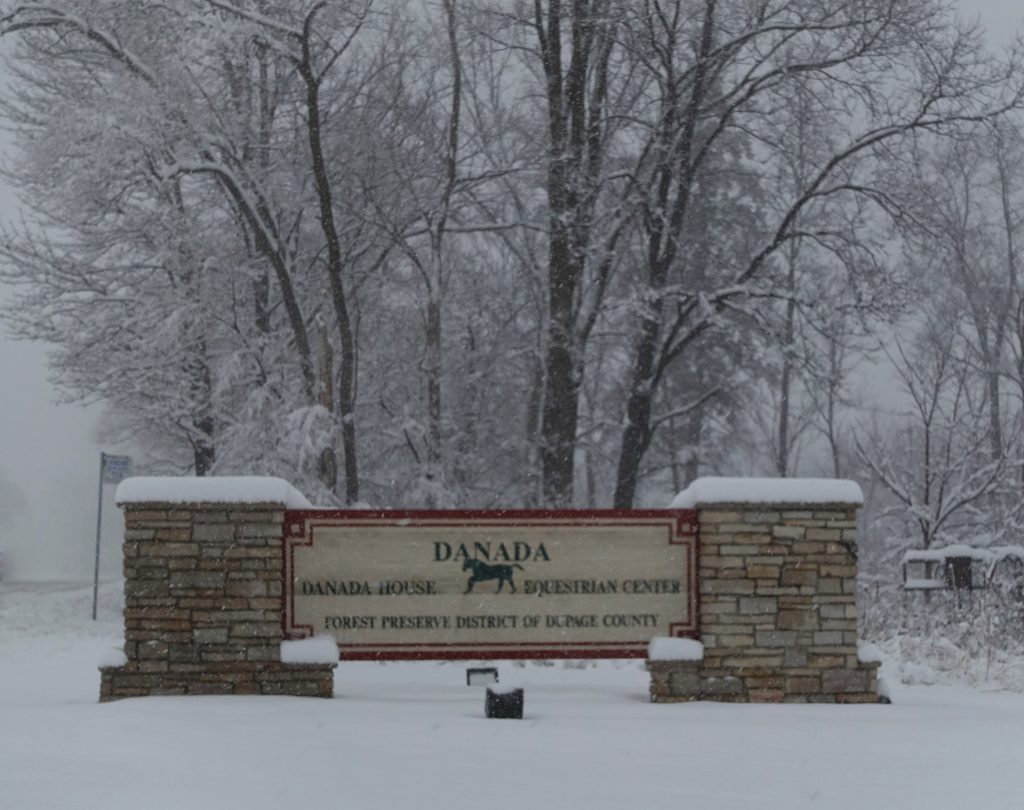 On a non-blizzard day, I might have visited the equestrian center, but not today.  I hope the horses are warm and sheltered. 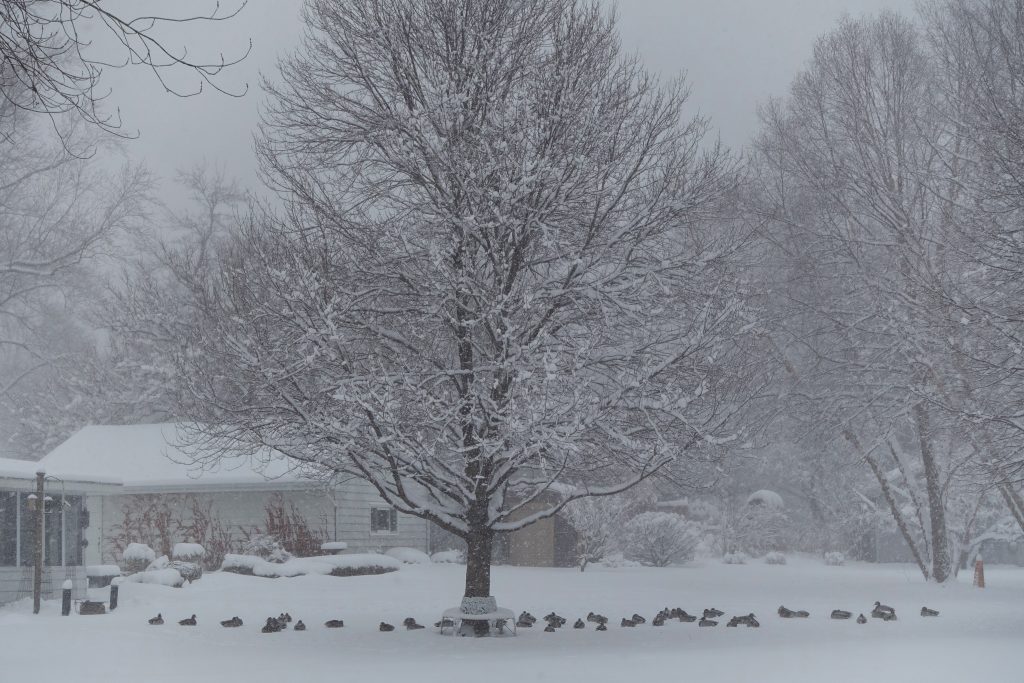 I suppose you could call this fowl weather.

The ducks don’t seem to mind the storm as the huddle under the tree for protection.  Brrrrrr.

I saw many other beautiful tree sculptures. 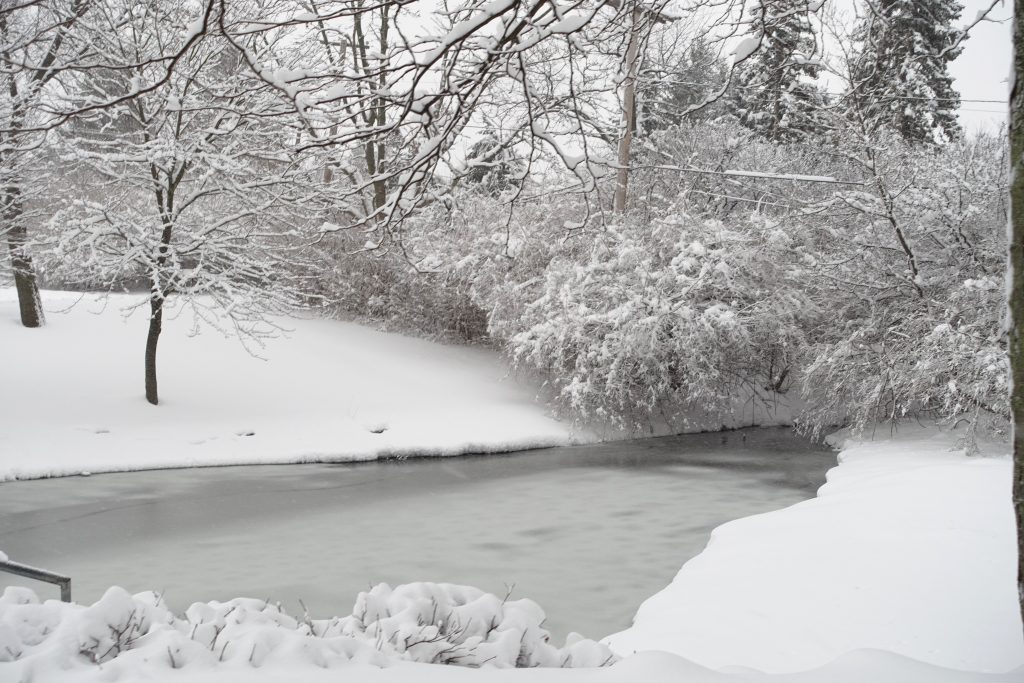 An iced-over creek cuts through the snow.

It’s cold enough here that the smaller creeks have a layer of ice covering them.  I know that fish are adapted to these conditions, but I don’t envy them today.   🙁 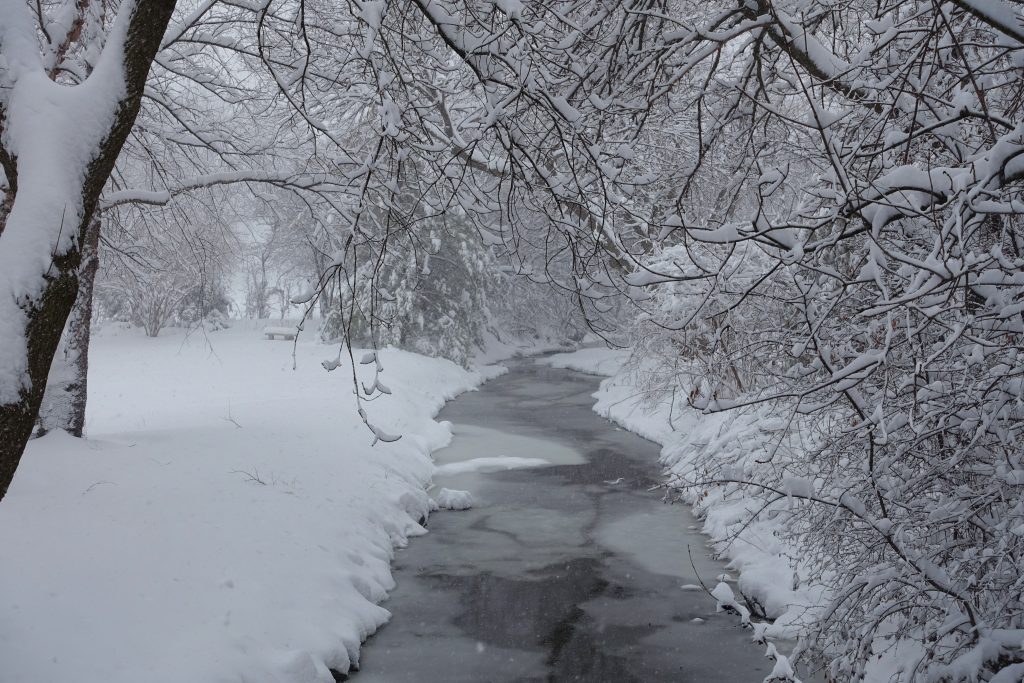 A wintery creek on a wintery day: wintery.

The small snow-covered bench indicates that this is part of a recreation area.  It would be fun to explore this creek on a hot summer’s day, wouldn’t it? 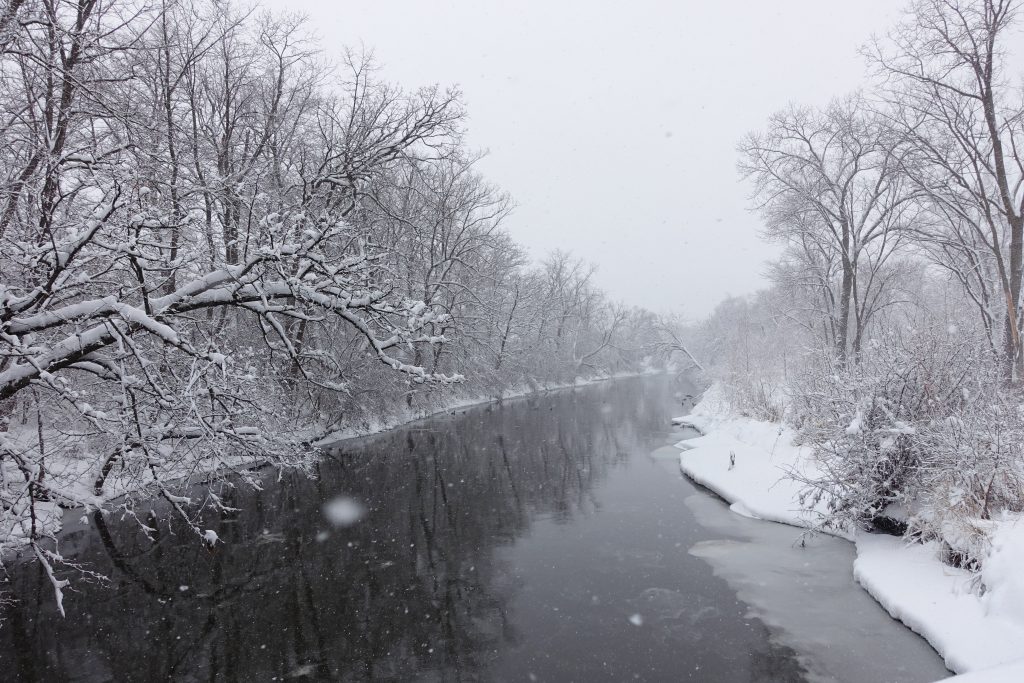 Even the larger rivers are forming ice.

Although the river is flowing, there is a heavy stillness.  The falling snow muffles sounds almost perfectly.

There are many more lovely landscapes to be seen in this blizzard. 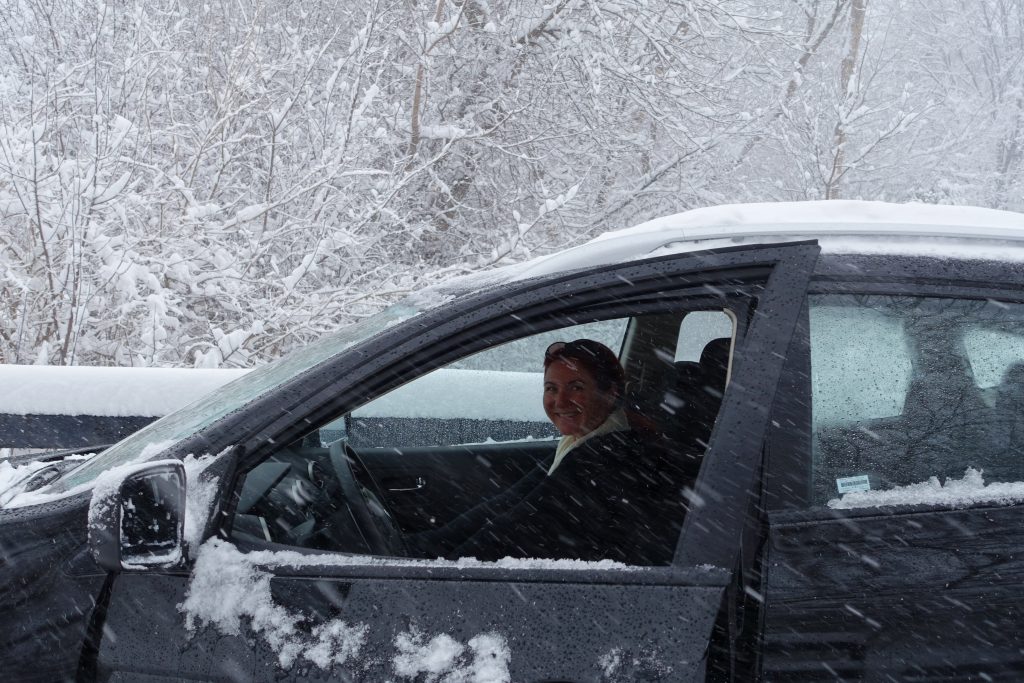 Safe and warm in my car.

I have a confession to make: I have no idea how to drive in winter conditions.

Check out these roads!  There is no way I’d even try to drive on these.  Fortunately for me, my husband grew up in the Midwest and he handles the car like a pro.  (We included a photograph of train tracks in the slide show, just because they looked cool.) 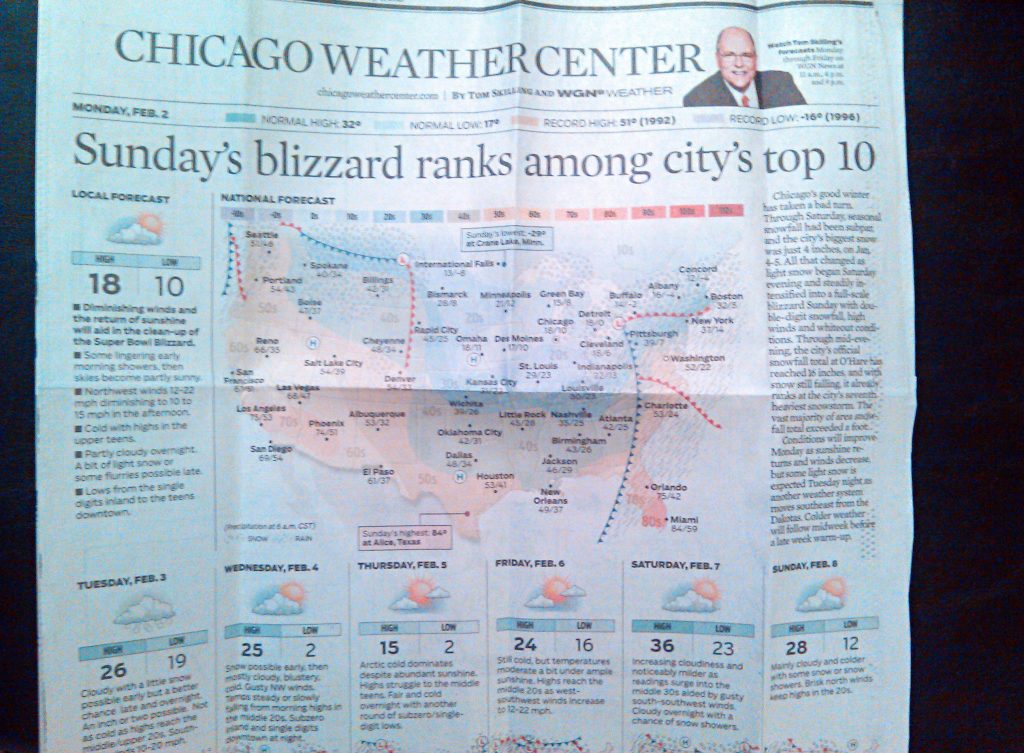 I took a photograph of a newspaper attesting to the snowy onslaught.  If you are going to have a blizzard, you might as well have a big one, right? 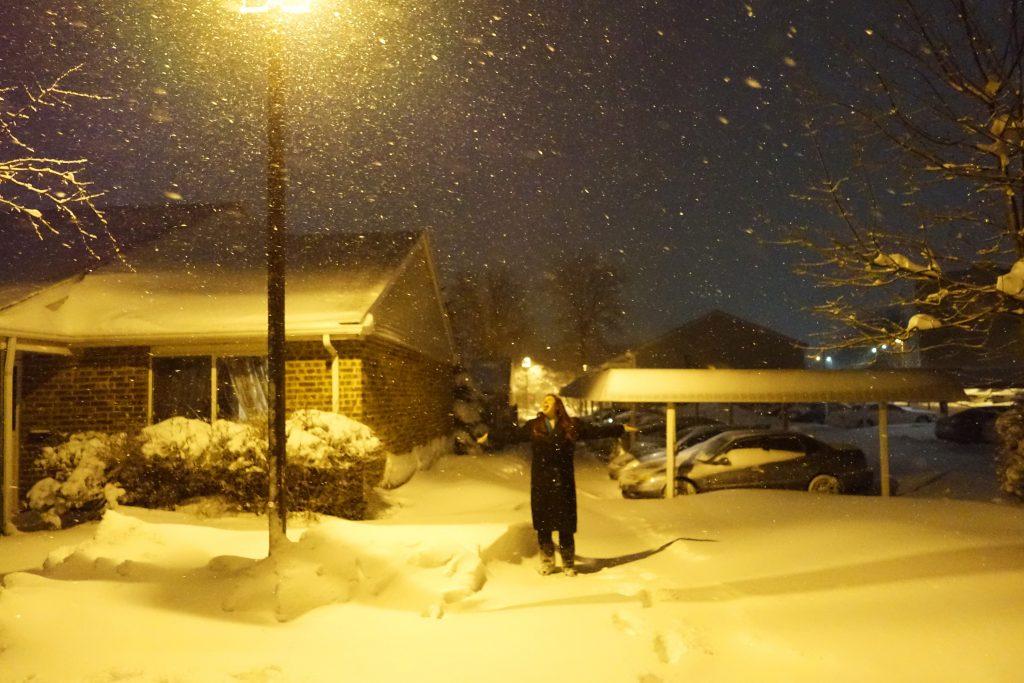 Although you may be thinking, “Frank Zappa warned us about this,” it’s just the street light.   😀   Besides, I’ve never had the chance to catch snowflakes on my tongue, and it is FUN! 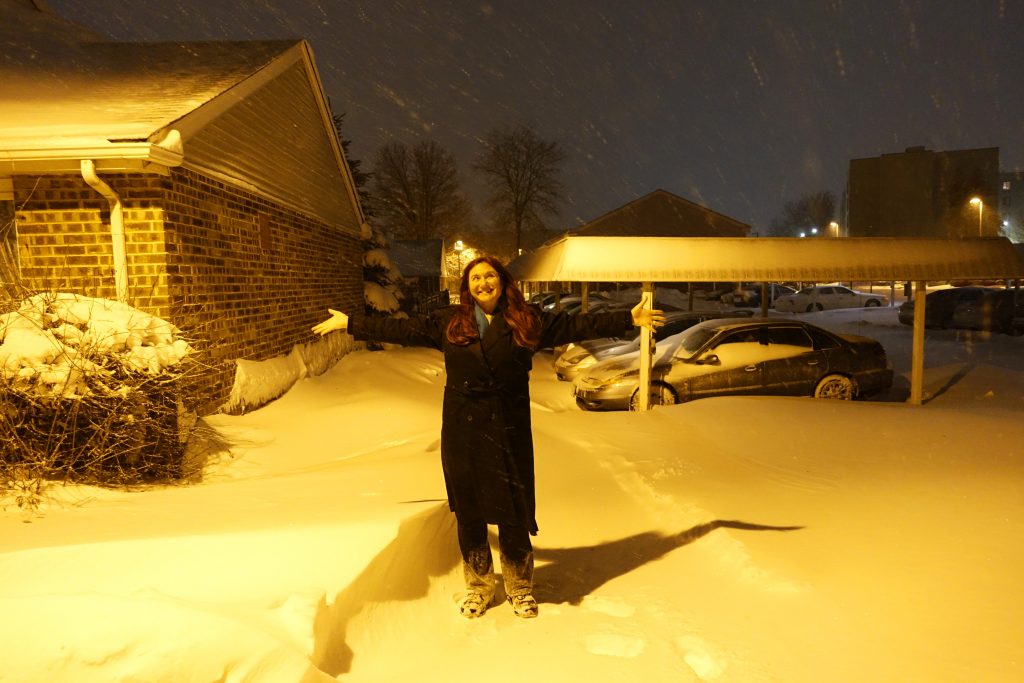 This has been quite an adventure for me.  Now I understand why Calvin and Hobbes liked winter so much.  But it’s time to go back inside and get warm.  Thank you, Chicago, for this wonderful blizzard!

awa Travels Tip: When I came to Chicago, I wasn’t expecting a winter wonderland.  Life and the world never cease to amaze me.